From their unsung labors to society-changing accomplishments, Connecticut’s women have contributed to diversified fields of endeavor. During colonial times, they kept farms, homes, and businesses running—despite restrictions that then, and long after, barred them from the same rights as men. Among those pioneering national and local change in the 1800s are educator-abolitionist (and state heroine) Prudence Crandall and women’s suffrage advocate Isabella Beecher Hooker. Twentieth-century notables include Mary Townsend Seymour, champion of African Americans’ civil rights, and Ella Grasso, first woman to be elected a US governor in her own right. Today, the Connecticut Women’s Heritage Trail connects new generations to the histories of these and other women. Book: The Private Journal of a Journey from Boston to New York, in the Year 1704. Kept by Madam Knight. Reprinted in 1865 – Archive.org 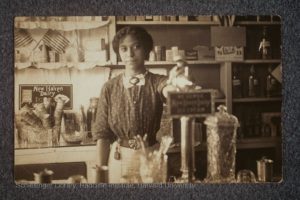 Photograph: The Red Cross Ambulance Corps pose in front of the Red Cross Motor Division ambulance. The women of the Ambulance Corps were trained in motor mechanics by the Y.M.C.A., ca. 1917 – 1919 – Connecticut State Library, Dudley Photograph Collection of Hartford During World War I (PG 034) Photograph: “Cooking Lab in Grove Cottage, 1919.” The Connecticut Agricultural College helped train nutritionists to teach women on the home front how to prepare meals with other foods through its Extension Service – University of Connecticut Libraries, Archives and Special Collections at the Thomas J. Dodd Research Center Photograph: First-generation Americans whose parents represent Italy, Greece, and England, these three girls work side by side at the punching machine, Pioneer Parachute Company, Manchester, Connecticut, 1942 – Library of Congress, Prints and Photographs Division