Themes:
Map Reading Skills, The Impact of Geography on History

In 1614 Dutch explorer Adriaen Block sailed along the Connecticut coast and up the Versche (Fresh) River—the Dutch name for the Connecticut River—as far as what is now Hartford. In 1633 the Dutch established a fortified trading post there. It was called the Huys de Hope—the House of Hope. For decades there was conflict between the Dutch in New Netherland and the English who came to settle in the same area. In 1650, the Dutch finally gave up their lands in Connecticut to the English.

How did the physical geography of New England affect how the colonies developed? 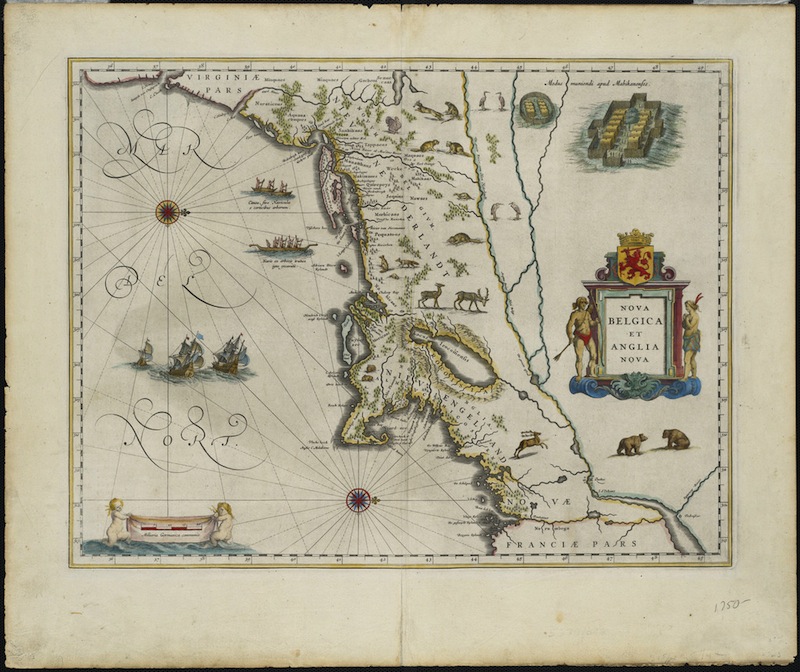 Willem Blaeu (Dutch), Nova Belgica et Anglia Nova, 1635 – This map is held in the collections of the Connecticut Historical Society and the Norman B. Leventhal Map Center at the Boston Public Library.

This map was based on a map drawn by Adriaen Block. It is oriented with west at the top. The map shows “Nieu Pleimouth” (Plymouth) and the Noord (North) Rivier (today called the Hudson), as well as the Versche (Fresh) River. It also includes images of native animals (probably never seen in real life by the artist), examples of Native People’s canoes and fortified villages, and European-style sailing ships. This later map features some of the same pictures and details as Blaeu’s map. It also includes the Fort de Goede Hoop (another name for the House of Hope) and some English settlements, such as Herfort (Hartford), Gilfort (Guilford), and Watertuyn (Watertown).

Using the Library of Congress’s Primary Source Analysis process (download Teacher’s Guide), give students time to examine the first of the two maps, and ask them to OBSERVE, REFLECT, and QUESTION.

Repeat with the later map and have students compare and contrast.

You may then choose to address some of the supporting questions (above) or focus on the questions that students have developed as part of their inquiry.

Take a field trip! Great educational programs related to this activity and the early colonial period are available throughout the state. Here are just a few suggestions:

ConnecticutHistory.org: Timeline: Settlement of the Colony of Connecticut