As a result of The Second Great Awakening (the protestant religious revival in the United States, 1795-1835), several schools that focused on the conversion and assimilation of Native children from near and far were established in Connecticut, including the Foreign Mission School in Cornwall, Moor’s Indian Charity School in Lebanon, and Plainfield Academy in Plainfield. This approach to assimilation later became systematized in the U.S. government-backed boarding school era (1860-1978), which used forcible extraction of Indigenous children.

The boarding schools in Connecticut did not take Native children from their communities via outright coercion; many children were voluntarily sent to these schools by their families in the hopes that educating them in white schools would yield leaders that would be beneficial for their home communities. Many of these Indigenous students went on to lead notable lives; others died while attending school far away from home.

Several students are highlighted in this activity. Find more information about the students in the Toolkit section below.

How can we achieve a better understanding of the past in the absence of primary sources that represent the full picture? Introduction to the Appendix about the Cornwall Foreign Mission from A report to the secretary of war of the United States, on Indian affairs, comprising a narrative of a tour performed in the summer of 1820, under a commission from the President of the United States… by the Rev. Jedidiah Morse. New-Haven: Printed by S. Converse, 1822, pages 264-265.
University of California, courtesy HathiTrust Henry Opukaha’ia was a Native Hawaiian student from what at the time was referred to as the Sandwich Islands. Henry had a traumatic childhood and seized the opportunity to sail to “New England” at the age of 16 in 1808. The excerpt from the memoirs of Henry Opukaha’ia tells us a bit about his plans for once he is done with school. 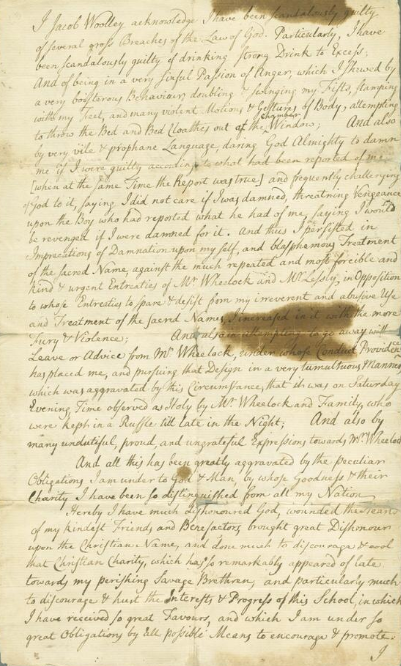 Jacob Woolley was a Lenape (Delaware) student at Moor’s Indian Charity School beginning in 1754. He was one of the first Native students to study under the school’s founder, Eleazar Wheelock. The “confession” from Jacob Woolley sheds light on how teenage behavior was characterized in the mission schools.

Daniel Simon was a Narragansett student who attended Moor’s Indian Charity School with his brother Abraham beginning in either 1768 or 1769. The letter from Daniel Simon is one of the most honest accounts from a Native student regarding their feelings about their educational experience at one of the schools.

While the transcripts of the full letters are provided, students can focus on the yellow highlighted sections. Excerpts of student and parent letters from A report to the secretary of war of the United States, on Indian affairs, comprising a narrative of a tour performed in the summer of 1820, under a commission from the President of the United States… by the Rev. Jedidiah Morse. New-Haven: Printed by S. Converse, 1822, pages 267-268, 272, 275-276.
University of California, courtesy HathiTrust

John Ridge was the son of prominent Cherokee political leader, Major Ridge. He lived in Cherokee homelands, or Georgia, prior to forced removal to Indian Territory. He began attending the Foreign Mission School in 1819 and was later joined by his cousin, Elias Boudinot. Ridge and Boudinot were threatened and harassed when they began romantic relationships with white women in Cornwall.

The letter from Elias Boudinot shows how correspondence with benefactors speaks to the purpose and goals of the mission schools. A short letter from his mother is also included.

John Ridge’s letter uses terms that would appeal to the reader, e.g. referencing the need to move toward civilization, the importance of being educated “like the whites.”

While the full letters are provided, students can focus on the red underlined sections.

1. Introduce and discuss the compelling question. What are examples of primary sources? How do we learn about the past?

2. Share the introduction to the Appendix about the Cornwall Foreign Mission School from the Report to the Secretary of War, 1822, and read through it together as a class. What was the stated purpose of the school (from the school’s constitution)? What other information does the introduction provide?

3. Explain that there were several schools in Connecticut that had Indigenous students from both near (tribes from Connecticut, New York, and Rhode Island) and far, including Henry Opukaha’ia, who was Native Hawaiian from Hawaii, and John Ridge, who was Cherokee from Georgia. The schools were: the Foreign Mission School in Cornwall (1817-1826), Moor’s Indian Charity School in Lebanon (1754- 1850), and Plainfield Academy in Plainfield (1770-1890).

4. Break students into three groups and assign one set of sources to each. Ask the students to read their assigned sources as a group and discuss:

5. Have each group report back to the class about their resources. Discuss as a class both what the Indigenous students said and what seems to be left unsaid.

6. Revisit the compelling and supporting questions. Because most of the primary sources from Indigenous students attending these schools at the time were used to generate continued funding for the schools, they can lack information about how the students truly experienced their education. Many Native people today are reflecting on the experiences of their ancestors through scholarship, art, and activism. Some examples are included below.

Read a book to learn more:

National Museum of the American Indian: The Trail of Tears: A Story of Cherokee Removal

“What’s in a name? A note on terminology” by the Turtle Island Social Studies Collective

“Memoirs of Henry Obookiah: A Rhetorical History.” The Hawaiian Journal of History, vol. 38 (2004)

“Through Our Own Eyes: A Chickasaw Perspective on Removal”